Mandatory arbitration clauses in California just became a lot less mandatory. The Ninth Circuit U.S. Court of Appeals handed consumers in three unrelated cases a victory on June 28, saying they may proceed with litigation of their claims against an appliance rent-to-own company, a cellular phone service, and an internet-cable company despite the existence of mandatory arbitration clauses in their contracts.

The decision is being hailed by consumer and employee rights advocates who say the proliferation of mandatory arbitration clauses has been used to block individuals from pursuing class actions, damages, injunctive relief, and other remedies to alleged wrongs. Advocates for mandatory arbitration – primarily businesses – say it is an “efficient, effective, and less expensive means of resolving disputes” as opposed to the “broken class action litigation system.”

In McGill v. Citibank (N.A., 2 Cal. 5th 945, 216 Cal. Rptr. 3d 627, 393 P.3d 85 (Cal. 2017)), the California Supreme Court held that a contract, under which companies using these agreements claim consumers waive their rights to seek public injunctive relief in any forum, is unenforceable under California law. The Ninth Circuit agreed with the district court that the Federal Arbitration Act (FAA) does not preempt California’s McGill rule.

The Blair plaintiffs claim in a proposed class action that Rent-A-Center charges excessive prices. The company moved to compel arbitration and for a mandatory stay, which a federal judge denied. Upholding that decision, the appellate panel explained that several state consumer laws offer the remedy of public injunctions, whose primary purpose is to prohibit unlawful acts that threaten future injury to the general public. It made clear the distinction between public injunctions and private ones that resolve disputes brought by individual parties.

The California Supreme Court held in McGill that an agreement to waive the right to seek public injunctive relief violates California Civil Code Section 3513, which provides that “a law established for a public reason cannot be contravened by a private agreement.” The McGill court said that a private party may waive its statutory right unless the statute doesn’t allow it and if the statute’s “public benefit is merely incidental to its primary purpose, and waiver does not seriously compromise any public purpose that the statute was intended to serve.”

Finding that the FAA does not preempt McGill, the Ninth Circuit cited two cases. First, it quoted the U.S. Supreme Court decision in AT&T Mobility LLC v. Concepcion (563 U.S. 333), which “permits agreements to arbitrate to be invalidated by generally applicable contract defenses.” Second, it cited its own decision in Sakkab v. Luxottica Retail N. Am., Inc. (803 F.3d 425), where it recognized that arbitration is in “many ways … well suited to resolving complex disputes, provided that the parties are free to decide how the arbitration will be conducted.” The McGill rule does not “mandate procedures that interfere with arbitration,” and arbitration of public injunctive relief does not need to sacrifice “the principal advantage of arbitration — its informality,” the court wrote.

The effect of the ruling is that the Blair litigation will continue. In the case of McCardle v. AT&T Mobility an arbitration award was vacated, and that litigation will move forward. In Tillage v. Comcast, the defendant argued that McGill does not apply to its contracts because Comcast customers are given the choice to opt-out, so they must arbitrate only if they agree to. “That argument fails, as McGill applies to any consensual waiver of public injunctive relief, irrespective of how the parties choose to waive that relief,” the Ninth Circuit held.

Consumer and employee rights groups strongly oppose mandatory arbitration. Public Citizen, for example, states on its website that “most people who are subject to mandatory, pre-dispute arbitration clauses in their contracts for employment, credit, sales or services do not know that they have waived their right to access the courts. By signing a car lease, using a credit card, accepting a new job, buying a computer, or purchasing private health insurance or HMO coverage, they may have waived their rights to hold companies accountable for wrongdoing under local, state, and federal statutory and common laws. Consumers and employees often have no choice but to waive their rights because arbitration clauses are presented in take-it-or-leave-it contracts.”

Leading the charge for mandatory arbitration clauses is the U.S. Chamber of Commerce. The organization joined with other groups to oppose what they call an “onslaught of anti-arbitration bills” being introduced in Congress. Arbitration has been used to amicably resolve disputes since the Federal Arbitration Act became law in 1925. “Unfortunately,” the Chamber of Commerce and others said in a joint letter to the U.S. House of Representatives on May 16, “there is an organized effort underway to dismantle the arbitration system in favor of bringing claims in the broken class action litigation system. Arbitration is an efficient, effective, and less expensive means of resolving disputes for parties to a dispute including consumers, employees, service members, and businesses. Multiple empirical studies have concluded that those bringing claims in arbitration do just as well, or in many circumstances, better in arbitration as in court.”

“Opponents of arbitration exaggerate the alleged unfairness of these agreements,” the group maintains. 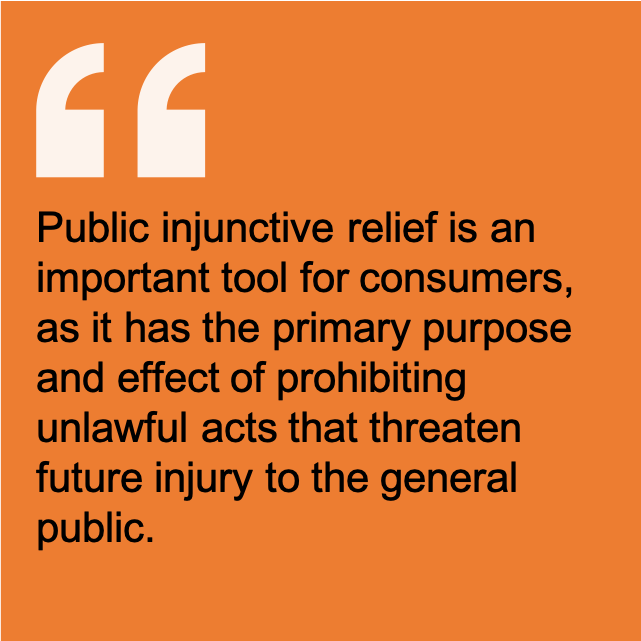 MoginRubin Partner Jennifer M. Oliver warns of the dangers of these mandatory clauses. “Stripping consumers’ ability to bring class action claims is ruinous to consumer protection. Class actions provide restitution to plaintiffs who would otherwise be without recourse either because they cannot afford legal representation, or legal representation is not economical compared with the cost of bringing a single plaintiff’s lawsuit. Businesses include mandatory arbitration clauses in their standard contracts to eliminate class action exposure, and consumers are forced to accept them to engage in crucial transactions like buying a car or accepting a job offer,” Oliver said.

“Fortunately, California is at the forefront of restoring consumers’ rights, both in the courts and legislature,” she continued. “For example, California’s soon-to-be-enacted privacy law, the California Consumer Privacy Act, or CCPA, includes a prohibition on contract terms that appear targeted at arbitration clauses and class action waivers.”

“This is a big win for California consumers,” said MoginRubin Associate Timothy Z. LaComb. “Public injunctive relief is an important tool for consumers, as it has the primary purpose and effect of prohibiting unlawful acts that threaten future injury to the general public. The decisions by the Ninth Circuit make clear that businesses cannot use mandatory, often coercive arbitration clauses to limit consumers’ right to wield this tool. Not only are these decisions consistent with California Supreme Court precedent, but they are also consistent with California’s increasingly pro-consumer legal climate.”