Five companies filed separate lawsuits earlier this year in the Western District of New York against the nation’s leading manufacturers of caustic soda, a chemical commodity widely used in manufacture and processing of everything from paper to pharmaceuticals. The defendants control at least 90% of the domestic caustic soda supply and have used their market power to charge artificially inflated prices, plaintiffs allege. 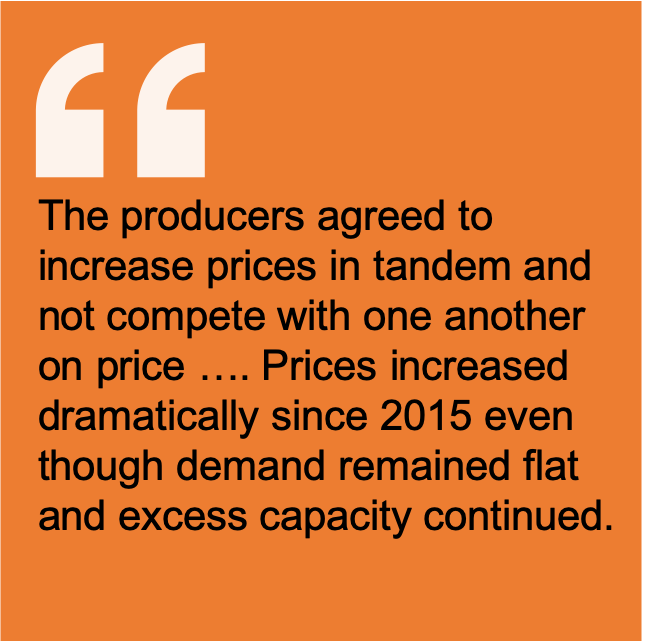 The plaintiffs maintain that caustic soda prices were flat for several years and then began to climb rapidly in late 2015. Because of this, and because margins were poor due to overcapacity and flat demand, the caustic soda makers were motivated to “conspire and combine to restrict domestic supply; to fix, raise, maintain, and stabilize the price at which Caustic Soda was and continues to be sold; and to allocate customers” in violation of the Sherman Act. “They also at times refused to supply customers, put them on allocation, or refused to bid on contracts while falsely claiming supply was tight or scarce,” the complaints maintain.

The producers agreed to increase prices in tandem and not compete with one another on price, the plaintiffs allege. Market shares have remained steady.

The issue “has drawn attention to a company that has grown through dozens of acquisitions to become a dominant supplier of crucial pricing data,” the Wall Street Journal has reported, referring to industry analyst IHS Markit Ltd. While not a defendant in the cases, the lawsuits charge that IHS Markit has enabled the caustic soda cartel. It is in “routine contact” with the manufactures and controls the industry’s price index. Prices increased dramatically since 2015 even though demand remained flat and excess capacity continued. Those conditions remain in place today yet IHS Markit forecasted “non-publicly to clients” that prices would increase in 2019, a prediction echoed by the industry, the plaintiffs maintain.