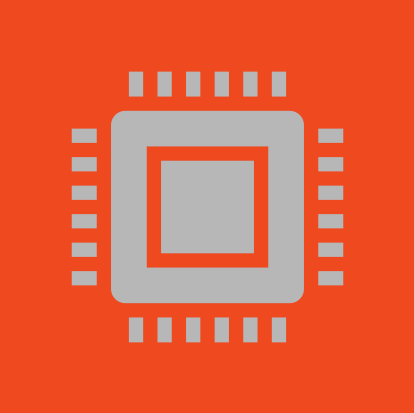 Ubiquitous modem chips allow our smart devices to communicate with each other over cellular networks using industry standards like 4G LTE. A small group of companies (and nations) are racing for global leadership in 5G, considered by many to be the second coming of mobile connectivity and experience.

5G promises not just faster phones, but smarter cars and homes, augmented and virtual reality, and better national defense systems. 5G is creeping into U.S. consumer markets now. Qualcomm Inc., Intel Corp., Taiwan’s MediaTek Inc., and China’s Huawei Technologies Co. Ltd., are big players in a big global market, which is forecast to grow from $1.3 billion in 2019 to $22.86 billion in 2027, according to market analysts at Statista.

The FTC maintained in its 2017 suit in the Northern District of California that Qualcomm was the dominant supplier of modem chips. At the core of the FTC’s case against the company was its so-called “no license, no chips” policy, by which Qualcomm refused to sell modem chips to device manufacturers unless they agreed to a separate patent license.

‘No License, No Chips’

Following a lengthy trial and an extensive review of evidence, U.S. Judge Lucy H. Koh decided In May 2019 that Qualcomm engaged in many years of anticompetitive conduct, damaging competitors and consumers. Judge Koh required Qualcomm to refrain from implementing its “no license, no chips policy” and to negotiate or renegotiate license terms with customers “free from the threat of lack of access to modem-chip supply.” Judge Koh also directed Qualcomm to “make exhaustive [standard-essential patent] licenses available to modem-chip suppliers” on “FRAND” terms, that is, terms that are fair, reasonable and non-discriminatory.

FTC Commissioner Rohit Chopra immediately hailed Judge Koh’s decision, calling it a “huge victory for every consumer who uses a smartphone and every American who believes in competitive markets.” Chopra added that the company’s “abusive intellectual property licensing practices can even damage our country’s national security interests.”

The FTC argues that Judge Koh’s ruling isn’t about Qualcomm’s “standalone duty to deal with competitors,” as Qualcomm argues. “Rather,” the FTC maintains, “the core anticompetitive conduct here is Qualcomm’s leveraging of its chip monopoly to secure from its customers inflated license royalties that do not reflect the value of Qualcomm’s patents. Those inflated royalties raise Qualcomm’s rivals’ costs, hobbling competition.”

Qualcomm argues that it will suffer irreparable harm in the form of lost revenue unless the order is stayed. Not so, the FTC argues, saying Judge Koh’s order allows Qualcomm to “secure every dollar to which it is entitled: market-based prices for its chips, and royalties that reflect the value of its patents.” Halting the remediation ordered by the judge would merely allow Qualcomm to “perpetuate its anticompetitive practices, creating roadblocks to competition that will impede innovation at this critical moment for 5G investment and harm consumers well into the future.”

The DOJ Antitrust Division could not disagree more with the FTC. It cited the Committee on Foreign Investment in the United States’ (CFIUS) characterization of Qualcomm as “the current leading company in 5G technology and standard setting,” crediting the company’s “unmatched expertise” and investment in research and development of the new technology.

“U.S. leadership in 5G technology and standard-setting is critical to national security,” the Antitrust Division argues. Allowing China to take the lead concerns many in the U.S. government. 5G will support new military capabilities and continue to help protect nuclear security and our nuclear infrastructure which are dependent on secure and advanced wireless communications. Qualcomm, as a key government supplier, also possesses volumes of classified and unclassified contracts with the Department of Defense.

Judge Koh “failed to identify harm to the competitive process,” the DOJ Antitrust Division attorneys argue, saying, for example, that the FTC did not demonstrate that Qualcomm intended to harm competitors. “No finding by the court suggests that Qualcomm’s decision to license in a way that maximizes royalties was a scheme calculated to incur ‘losses to drive rivals from the market or to discipline them’” as precedent requires, the DOJ maintains.

The FTC says the DOJ’s national security claim is designed to obscure the fact that the department is protecting Qualcomm.

Qualcomm’s business strategy is also getting negative attention abroad. European Union Antitrust Commissioner Margrethe Vestager fined the company $271 million for alleged predatory pricing, charging the company with abusing its market dominance in the 3G baseband chip business. Once again, such chipsets are critical parts of mobile devices. Vestager said the company was selling the chipset below cost to force Icera Inc. out of the market. Icera is based in the U.K. and is owned by U.S.-based Nvidia Corp.

“The fact that Qualcomm dominated this market is not, as such, a problem under EU competition rules. We value companies for becoming successful due to their skills and innovation. The problem is when a dominant company distorts competition against the interests of consumers and the market as a whole.”

As a startup, Icera introduced its first baseband chipset to the market in 2006, immediately offering an attractive alternative to Qualcomm’s baseband chipsets in the data card segment. Qualcomm identified Icera as a “critical” threat in 2010, Vestager said, adding that Qualcomm was worried that Icera would start offering 3G chips for the infinitely more lucrative smartphone market.

“To make sure that Icera’s business could not reach a size that could endanger its market position, Qualcomm took what it described in internal documents as ‘preventive actions.’ This meant offering very targeted price concessions to two strategically important customers, namely Huawei and ZTE. These were big customers of chipsets for data cards and they were essential for Icera to succeed in the market,” Vestager said. During two crucial years for Icera, Qualcomm offered three of its leading edge chipsets at prices below cost to Huawei and ZTE.

With this obstacle in place Icera was not able to gain traction as a chipset supplier for data cards and from entering the smartphone market.

“Qualcomm’s abusive behaviour also had a negative impact on innovation. By choking off Icera’s revenues from the 3G business, Qualcomm deprived Icera from the funds it needed to develop its chipsets for the next wireless generation, the 4G standard. Qualcomm did not demonstrate that its conduct created efficiencies that could justify it. In short, Qualcomm’s behaviour deprived consumers of a wider choice of technologies, and affected Icera’s ability to develop chipsets for the next wireless technology generations,” Vestager concluded.

Last year the EU Antitrust Commissioner fined the company $1.23 billion for payments it made to Apple Inc., to exclusively use Qualcomm chips. “In both that case and today’s, Qualcomm’s objective was the same: to protect its dominant position in relation to baseband chipsets to shut out rivals,” Vestager said. 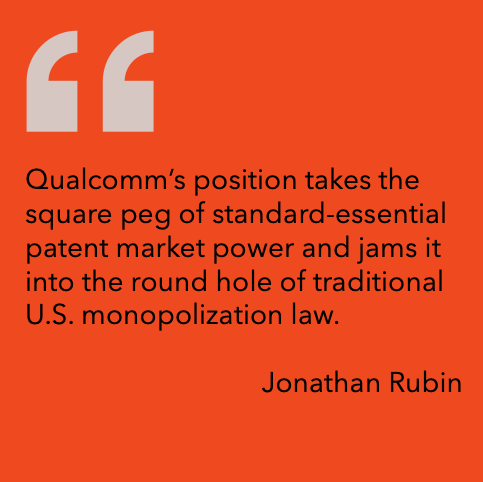 “A patentee gains monopoly power when its patented technology is incorporated into technical standards. In that case, the patentee’s right to exclude others from practicing the invention is tantamount to the power to exclude others from an entire market. A company that demands a high royalty to license products that incorporate a standard-essential patent (“SEP”) is simply extracting monopoly rents,” says MoginRubin Partner Jonathan Rubin.

“The conundrum faced by U.S. antitrust enforcement is that lawfully acquired or created monopolies may ordinarily charge monopoly prices without violating the antitrust laws,” Rubin says. “The U.S. has no ‘exploitative’ offense akin to the European Union’s proscription against abuse of dominance, which includes charging monopoly prices. Because its market position as a SEP patentee was acquired lawfully, Qualcomm argues that their demands for monopoly royalties are lawful. And with respect to would-be customers that refuse to pay, Qualcomm argues that U.S. antitrust law does not impose a duty to deal on private actors, even if they are monopolists.”

“Qualcomm’s position takes the square peg of SEP market power and jams it into the round hole of traditional U.S. monopolization law,” according to Rubin. “The legal canons that protect the right of lawful monopolists to charge monopoly prices or to refuse to deal must yield to a rule that royalties for standard-essential patents must be fair, reasonable, and non-discriminatory (“FRAND”), regardless of whether or not the patentee has made an ex ante patent disclosure or given a prior FRAND commitment. New legislation to that effect would empower U.S. monopolization law with a remedy to a distinct competition problem that currently resists enforcement efforts based on traditional antitrust principles.”

“Admittedly, such a rule in the final analysis leaves it to a court to determine whether a royalty is FRAND. But patent courts routinely value the economic contribution of different inventions and antitrust courts often determine competitive price levels in counter-factual contexts. Companies do not obtain SEPs unconscious of what they are doing. Technology companies should not be permitted to introduce anticompetitive conditions into markets that happen to make use of industrial standards,” Rubin concluded.