The German competition regulatory authority has decided to bar Facebook from combining user data with data it scrapes from non-Facebook sources — a major spring of information used by the company — unless the user expressly gives permission. The agency says Facebook has used its restrictive user agreement to dominate the German market. Facebook, which is appealing the decision, says competition there is “fierce.”

Facebook’s terms and conditions require users to allow such data gathering as a precondition to participating in the social network. But the Federal Cartel Office (FCO) – or the Bundeskartellamt in German – says the company may no longer collect user data from the internet or smartphone apps or assign such data to the user. Facebook may collect data it gathers from other services it owns, like WhatsApp and Instagram, but that data may only be assigned to Facebook users with their consent.

If users deny Facebook the right to collect and assign non-Facebook data, then the company will have to “substantially restrict its collection and combining of data.” The FCO directed Facebook to propose solutions to accomplish these restrictions.

The FCO said Facebook’s practice was anticompetitive. “The combination of data sources substantially contributed to the fact that Facebook was able to build a unique database for each individual user and thus to gain market power,” FCO President Andreas Mundt said in a February statement.

Facebook holds a dominant position in the German market for social networks, the FCO said, and as such “is subject to special obligations under competition law.” The FCO did not count platforms such as LinkedIn, YouTube, Snapchat, Twitter and others, saying they served more specialized purposes. 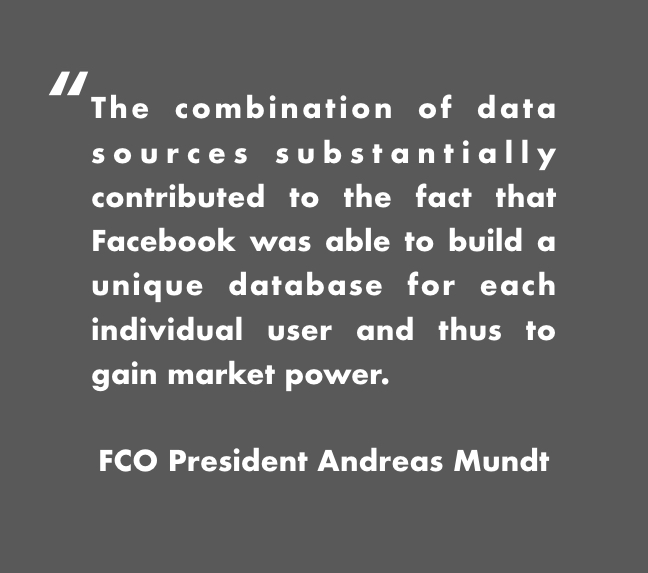 “In the operation of its business model the company must take into account that Facebook users practically cannot switch to other social networks,” Mundt said. “In view of Facebook’s superior market power, an obligatory tick on the box to agree to the company’s terms of use is not an adequate basis for such intensive data processing. The only choice the user has is either to accept the comprehensive combination of data or to refrain from using the social network. In such a difficult situation the user’s choice cannot be referred to as voluntary consent.”

The FCO also said Facebook’s terms of service and how it collects and uses data violate European data protection rules “to the detriment of users.”

“Facebook’s conduct represents above all a so-called exploitative abuse. Dominant companies may not use exploitative practices to the detriment of the opposite side of the market, i.e. in this case the consumers who use Facebook. This applies above all if the exploitative practice also impedes competitors that are not able to amass such a treasure trove of data. This approach based on competition law is not a new one, but corresponds to the case-law of the Federal Court of Justice under which not only excessive prices, but also inappropriate contractual terms and conditions constitute exploitative abuse (so-called exploitative business terms).”

Facebook intends to appeal so German Facebookers can continue to enjoy the platform. The FCO “underestimates the fierce competition we face in Germany, misinterprets our compliance with GDPR and undermines the mechanisms European law provides for ensuring consistent data protection standards across the EU.” 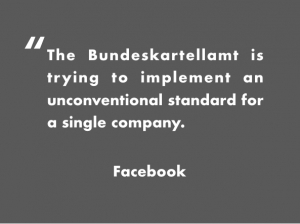 The company declares that “popularity is not dominance,” adding that even the FCO itself found that 40% of all social media users in Germany don’t use Facebook, and criticized the government for finding YouTube, Snapchat, Twitter and other platforms irrelevant to analyzing market dominance.

Facebook said it is fully compliant with the GDPR and is accountable for protecting user information. Since GDPR went into effect the company gave users more information and more control over their information, the company says. It said it would soon roll out “Clear History,” a tool that will show users information Facebook receives from websites and services who use the platform’s business tools and allow users to disassociate the data from the users’ accounts.

The company also makes the point that sharing data across platforms also promotes safety. “Using information across our services also helps us protect people’s safety and security, including, for example, identifying abusive behavior and disabling accounts tied to terrorism, child exploitation and election interference across both Facebook and Instagram,” Facebook says.

“Every day, people interact with companies that connect and use data in similar ways. And all of this should be – and is – a legitimate area of focus for regulators and policymakers around the world. Yet the Bundeskartellamt is trying to implement an unconventional standard for a single company,” Facebook maintains.