Commercial U.S. buyers of Farmed Atlantic Salmon have sued many of the leaders of what they maintain is a global cartel that has colluded to fix and drive up prices. The European Commission is investigating them as well, kicking off its probe with simultaneous raids of plants operated by Norwegian companies.

In Re Farm-Raised Salmon and Salmon Products Litigation is the combination of several lawsuits brought by salmon purchasers. According to one of those complaints, filed by Beacon Fisheries on May 15, 2019, the salmon producers “must collude” to keep prices stable in the face of fluctuating supply and demand during what is a long production cycle. 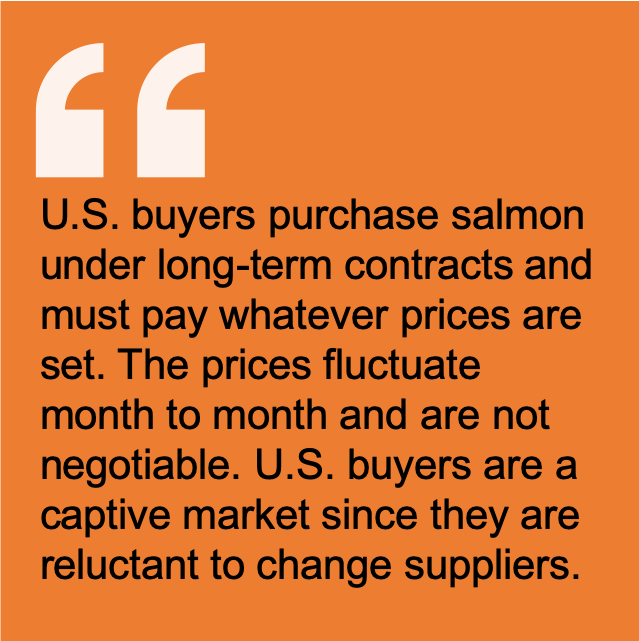 U.S. Judge Cecilia M. Altonaga in Miami is presiding over the case, which brings together the claims of plaintiffs Beacon Fisheries, Euclid Fish Company, Cape Florida Seafood, Schneider Fish and Sea Food Corp., Hesh’s Seafood, and The Fishing Line LLC. Another case brought by Wood Mountain Fish has not yet been combined. Judge Altonaga has ordered plaintiffs file a new consolidated complaint by Aug. 19, 2019.

A similar case was filed on May 9 in U.S. District Court in Maine by Prime Steakhouse.

U.S. buyers purchase salmon under long-term contracts and must pay whatever prices are set. The prices fluctuate month to month and are not negotiable. U.S. buyers are a captive market since they are reluctant to change suppliers. The prices from different suppliers have continued to rise and the prices among them are virtually the same. Suppliers simply do not compete with each other on price in the U.S.

According to the United Nations Food & Agriculture Organization, salmon prices continue to exceed their three-year average. Production is slowing but steady and export revenues are climbing. Demand is up across the world. The pace of growth of global demand for salmon is such that the market can absorb an increase in supply of 6–7 percent per year and while maintaining current price levels, according to a recent analysis from Norwegian bank Nordea.

Allegations of price fixing in the U.S. followed European Commission raids of a number of fisheries operated by Norwegian companies, including offices in Scotland and the Netherlands, acting on information that they were participating in “anti-competitive agreements and/or concerted practices related to different ways of price coordination in order to sustain and possibly increase the prices for Norwegian salmon.” Norway is not a member of the EU and that country’s anticompetition authority was reportedly not involved in the raids.

Since at least November 2017, the EC says, the Norwegian producers have been allegedly: