The line of politicians, regulators, and legislators in the U.S. and abroad expressing serious concerns about the market power held by big technology companies seems to grow longer by the day. This week, U.S. House of Representatives Antitrust Subcommittee Chairman David N. Cicilline (D-RI) announced a bipartisan investigation, saying the “market power in digital markets presents a whole new set of dangers” for the U.S., both politically and economically.

“After four decades of weak antitrust enforcement and judicial hostility to antitrust cases, it is critical that Congress step in to determine whether existing laws are adequate to tackle abusive conduct by platform gatekeepers or whether we need new legislation to respond to this challenge,” Cicilline said.

(Read our earlier post about investigations by the U.S. Justice Department and the Federal Trade Commission into Google and Amazon, respectively.) 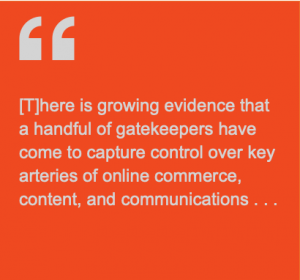 According to a statement from the congressman’s office, the investigation will focus on: 1) Documenting competition problems; 2) Examining whether dominant firms are engaging in anti-competitive conduct; and, 3) Assessing the adequacy of existing laws, policies, and enforcement levels.

House Judiciary Chairman Jerrold Nadler (D-NY) said, “[T]here is growing evidence that a handful of gatekeepers have come to capture control over key arteries of online commerce, content, and communications …. Given the growing tide of concentration and consolidation across our economy, it is vital that we investigate the current state of competition in digital markets and the health of the antitrust laws.”

Ranking Member Doug Collins (R-GA) cited an increasing number of questions about whether the market remains competitive. Ranking Member Jim Sensenbrenner (R-WI) said that while it’s important to evaluate the regulatory framework governing this vital market, he cautioned his colleagues to “avoid any predetermined conclusions.”

“The increased antitrust scrutiny of super-platforms like Facebook, Amazon, Apple and Google,” said MoginRubin Attorney Nicole Ambrosetti, “should shed some much-needed light on the harmful effects of anticompetitive practices downstream, such as the dissemination of consumer’s information, as well as harmful effects upstream, such as the exploitative tracking of content sellers’ information.”