THE NEW ANTITRUST PARADOX: HOW PROTECTING COMPETITORS AHEAD OF CONSUMERS KILLS THE COMPETITION THAT ANTITRUST IS DESIGNED TO PROTECT. IS IT TIME TO GO BACK TO THE FUTURE?

By Dan Mogin and Jonathan Rubin

Here are the puzzle pieces.

Antitrust’s current consumer welfare standard enshrines short-term price and output effects and protecting competition – but not competitors. A consumer welfare standard that emasculates the antitrust laws in the name of protecting consumers and competition – but which does neither – is an absurdity, inconsistency, or oddity. You can’t have competition without competitors.  The public and some politicians have lost faith in antitrust’s ability to promote competition or protect consumers. This antitrust paradox has led to some ambitious pot-stirring by a new wave of antitrust reformers.

How did we get here?

It’s a complex story of law, politics, economics, political economy and other factors. Here we attempt to put the pieces together with a simplified explanation and suggest a realistic guideline for reformers: go back to the future.

In 1962, in dictum, the Supreme Court wrote the antitrust laws were enacted for “the protection of competition, not competitors.” Brown Shoe Co. v. United States, 370 U.S. at 370 U.S. 320 (1962).  In other words, as a matter of policy the antitrust laws should protect the competitive process or the marketplace as a whole instead of individual competitors. In 1977, the Supreme Court transformed that dictum into a threshold standing requirement:  to sue under the antitrust laws required proof of injury to competition, not competitors.  Brunswick Corp. v. Pueblo Bowl-O-Mat, Inc., 429 U.S. 477 (1977).  The next year, Robert Bork wrote his influential thesis, The Antitrust Paradox, and the Chicago School of antitrust was ascendant.  Before long the “consumer welfare standard” was enshrined in antitrust law and expanded, sometimes in the name of disciplining antitrust by tethering it more closely to economics. Short-term price and output effects became the consumer welfare standard’s crown jewels, eclipsing other antitrust goals.  Unfortunately, the law lags the economics profession by several decades, so we are left with an antitrust paradox created by Bork’s thesis: a consumer welfare standard that doesn’t promote consumer welfare and a competition law that doesn’t protect consumers, competitors or competition.

The Brunswick rule made great sense in the context of that particular case and was a product of the language in Section 4 of the Clayton Act authorizing private suits for injury “by reason of anything forbidden in the antitrust laws.”  While there probably were antitrust violations in Brunswick, they weren’t the source of the injuries alleged –  enhanced competition was. Brunswick held the antitrust violation must have caused the injury. OK, fine, a little bit of practical textualism applied in a narrow factual context. But expansion of the Brunswick rule and related judicial interpretations lie at the heart of the current discontent or—dare we say it—inefficiency in the antitrust laws.

The Antitrust Paradox is premised on Brunswick’s holding that antitrust law should protect competition, not competitors.  The Chicago School holds that markets are self-correcting and therefore antitrust enforcement should be minimal.  To Bork, the paradox of antitrust law was that it often protected less efficient competitors from competition, leading to allocative inefficiency and higher prices. So, he added Chicago School ideas of economic efficiency as a policy goal and labeled his mix “the consumer welfare standard.”  Bork focused his attack on typical non-price vertical arrangements, but his ideas spread to other areas, such as oligopolies, predatory pricing, and resale price maintenance. The Antitrust Paradox was hugely influential and its Chicago School thinking became dominant. For the next 30 years or more the Supreme Court adopted Paradox-thinking in numerous cases and the lower courts followed.

In today’s antitrust legal practice, the consumer welfare standard has come to require proof of short-term price and output effects. Unfortunately, for present-day Americans, The Antitrust Paradox was wrong in many respects, including its economics and its mis-definition or mis-use of “consumer welfare,” previously a term of art in economics. Scholars argue that Bork’s consumer welfare or economic efficiency ideas don’t have any basis in the legislative history of the Sherman Act. It is certainly not part of the text.

The short-term, effects-based legal analysis has become embedded in the rule-of-reason and in monopolization, non-price concerted action, and merger cases.  But, because short-term effects have become the be-all-and-end-all, there is no backstop to protect competition or consumers. If short-run effects cannot be proven, the conduct or transaction is likely to pass muster with the antitrust enforcement agencies and the courts, even if the result is a tight oligopoly or near-monopoly. In mergers between firms in related but not overlapping markets, the longer-run dynamic competitive implications are practically undetectable by conventional merger analysis. Deals often go unchallenged, even though the applicable legal standard is supposed to be predictive; that is, whether the effect of the transaction “may be substantially to lessen competition, or to tend to create a monopoly.”  Another absurdity, inconsistency or oddity, i.e. Antitrust Paradox 2.0.

The shortsightedness of short-term effects isn’t confined to mergers. The FTC closed its Google investigation in 2013 because it couldn’t find harm to consumer welfare because antitrust protects “competition, not competitors.” But the analysis should not have stopped there. When a firm leverages network effects and first-mover advantages to “tip” a “winner-take-all” market, the benefits are enormous—including millions of subscribers, thousands of terabytes of consumer data, vast cloud infrastructure, and a largesse of financial resources. This enables the firm to exclude rivals and entrench itself as the dominant platform. Restrictive sales policies, strategic alliances, and acquisitions in related but not overlapping markets all may be found lawful if they cannot be shown to harm Borkian consumer welfare – short-term price and output. Unfortunately, the only provable effects that remain after a short-term price and output analysis in such cases is the adverse effect on rivals and potential rivals who find it more difficult to compete. Under the Borkian interpretation of Brunswick, antitrust liability fails.

The elephant in the room is that a mandate to “protect competition, not competitors” is based on a false distinction. How does one protect competition if there are few or no competitors or only weak ones? The presumed economic harm from protecting competitors is the economic drag from propping up inefficient firms. If consumers reward efficient firms with market share, that is a pro-competitive outcome that should not be punished by antitrust law. The knock on the “structural” standard, which prevailed in the pre-Borkadox period is that it protects less efficient competitors, so it is contrary to promoting competition.  See Bork.

But this critique of a structural approach only makes sense up to a point. When the ultimate result of an act or transaction means the survival or emergence of fewer than three or four competitors in a market, the effects-based approach loses its ability to detect the anticompetitive outcomes. At the edge of a tight oligopoly, antitrust must consider more than the short-term effects of the challenged conduct.

To reconcile the two truths—that antitrust ought to not prop up less efficient competitors but should prevent the formation of tight oligopolies—antitrust should go back to the future and pay more attention to market structures.  For instance, examining a bank merger in 1963, the Supreme Court embraced structuralism by holding that antitrust was intended “to arrest the trend toward concentration, the tendency to monopoly, before the consumer’s alternatives disappeared through merger, and that purpose would be ill-served if the law stayed its hand until 10, or 20, or 30 more … banks were absorbed.” In other words, structure matters.

In concentrated markets, antitrust should turn from short-term effects to more modern economic theories rooted in imperfect competition and external effects. Because such considerations are obscured or undetected using the current short-run standard, a structural backstop may mean sacrificing strict ideas of efficiency. But sacrifices in short-term efficiency to preserve longer-run dynamic competition is a reasonable trade-off. Paradoxically, we have been there before. Perhaps it’s time for the pendulum to rest in equilibrium; to create a blend of the best of consumer welfare and structuralism.

In cases involving few competitors, dominant firms, and a few dominant platforms the consumer welfare standard should incorporate a structural backstop skeptical of oligopoly and mindful of the medium- and long-run consequences of the challenged act or transaction. A structural backstop would offer a temporary safe harbor to market participants, or to firms considering entering the market, where the likely alternative is the long-run entrenchment of one or two dominant providers.

Back to the future prescriptions for restoring antitrust’ s vigor without resorting to regulatory approaches favored by today’s reformers include rolling back other Borkian/ Chicago School innovations that undermine true consumer welfare.

While reformers may be tempted to re-invent, thinking, as did the brilliant Back to the Future movie character, Doc Brown, — “Roads? Where we’re going we don’t need roads!” — we suggest a trip back to the future to escape the new antitrust paradox. 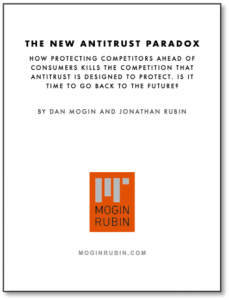