The Wall Street Journal reported on May 31 that the U.S. Justice Department is “gearing up” for an antitrust investigation of Google, “a move that could present a major new layer of regulatory scrutiny for the search giant.”

WSJ reporters Brent Kendall and John D. McKinnon quoted unnamed sources as telling them that DOJ’s Antitrust Division has been “laying the groundwork for the probe” in recent weeks. That groundwork includes the agreement between the Federal Trade Commission and the DOJ that the DOJ would take the lead. In related news, The Washington Post reported on June 1 that the FTC will lead an investigation of Amazon.

In February, the FTC Bureau of Competition made it clear it has its sights set on the U.S. technology sector, launching a task force that is said to be monitoring the industry, investigating potential anticompetitive conduct, and taking enforcement action as necessary.

In announcing the task force, FTC Chairman Joe Simons said “it makes sense for us to closely examine technology markets to ensure consumers benefit from free and fair competition. Our ongoing Hearings on Competition and Consumer Protection in the 21st Century are a crucial step to deepen our understanding of these markets and potential competitive issues. The Technology Task Force is the next step in that effort.” Read our post about the task force.

Several of the Democratic candidates for president have made antitrust in the tech sector key parts of their platforms.

Sen. Elizabeth Warren is the most aggressive on this issue, saying her administration would make “big, structural changes to the tech sector to promote more competition — including breaking up Amazon, Facebook, and Google.”

“Today’s big tech companies have too much power — too much power over our economy, our society, and our democracy,” she said, adding that Amazon enjoys nearly half of all e-commerce while Google and Facebook monetize the more than 70% of all Internet traffic that goes through their sites. She blames weak antitrust enforcement. Read our post about Warren’s two-point plan.

In February, just days before announcing her candidacy, Sen. Amy Klobuchar introduced two bills designed to “modernize antitrust enforcement and promote competition.” She is a ranking member of the Senate Subcommittee on Antitrust, Competition Policy and Consumer Rights, and is considered a subject matter expert. Klobuchar was among the more aggressive senators when it came to questioning the privacy and political advertising policies at Facebook, Google and Twitter. Read our post.

Big social media and technology companies are under intense scrutiny in Europe, too.

The European Commission recently fined Google $1.69 billion for breaching EU antitrust rules, saying, “Google has abused its market dominance by imposing a number of restrictive clauses in contracts with third-party websites which prevented Google’s rivals from placing their search adverts on these websites.” The Commission fined Google $2.7 billion in 2017 and nearly double that amount in 2018, when it hit the company with a $5 billion fine. Read our post.

The German competition regulatory authority recently decided to bar Facebook from combining user data with data it scrapes from non-Facebook sources — a major spring of information used by the company — unless users expressly give permission. The agency said Facebook has used its restrictive user agreement to dominate the German market. Facebook, which is appealing the decision, says competition there is “fierce.” Read more.

Momentum appears to be shifting against the big tech companies. Will we see breakups in the next few years, or will the companies make adjustments voluntarily to keep themselves whole? Will social media companies take meaningful steps to protect privacy and avoid being used as weapons against democracy? Will consumers care enough about these issues to take their clicks and eyeballs elsewhere? One thing is for sure: This is going to be one interesting space to watch and one of the hottest areas of law we’ve seen in decades. 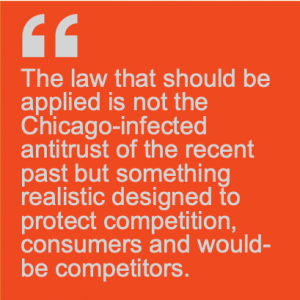 “With leading U.S. presidential candidates calling for Google’s breakup and billions in fines already levied against the company in Europe, some would call this development unsurprising,” says MoginRubin Partner Jennifer Oliver. “But the EU concept of abuse of dominance differs significantly from the Chicago school efficiencies-based analysis U.S. antitrust authorities have adopted in recent decades. This investigation could signal a pendulum swing toward greater accountability for dominant firms in the U.S., similar to what they’ve experienced in Europe. The DOJ’s market definition — and how Facebook, Amazon and Netflix are able adjust to prevent a similar fate — will be particularly interesting.”

MoginRubin co-founder Dan Mogin added these words of caution. “First, meaningful antitrust action against the dominant tech firms would be a departure for the U.S. enforcement community. The last significant monopolization case was against Microsoft in the mid-1990s and government enforcement has since atrophied in areas other than international cartels; there the atrophy is more recent. Second, domestic politics will likely affect the investigators. And, because these are domestic firms, it won’t be long before the astro-turf outrage machines begin to churn out high pitched editorials and the like. Such histrionics should be ignored. Third, the case(s) should be decided based on the evidence and law without political interference (in its broadest sense). The law that should be applied is not the Chicago-infected antitrust of the recent past but something realistic designed to protect competition, consumers and would-be competitors.”