Amazon dodges price competition with other e-commerce sites by forcing merchants into agreements that penalize them if their prices beat Amazon’s.

Amazon has 160 million Amazon Prime members nationwide — 25 million in California alone. A recent survey cited by the AG revealed that 96% of Prime members are more likely to buy products from Amazon than any other online store, and 74% go directly to Amazon when they are ready to buy a specific product. This makes Amazon a “must-have distribution channel” for merchants, the state says. The total cost of selling on Amazon exceeds that of selling via other online stores, yet merchants feel they “have nowhere else to go and Amazon knows it,” as one said.

“Merchants must agree not to offer lower prices elsewhere — including competing sites like Walmart, Target, eBay, and, in some cases, even on their own websites — and to accept drastic penalties like loss of the ‘Buy Box’ on Amazon or to ‘compensate’ Amazon if other online stores do lower their prices,” the state says. “Merchants that do not comply face sanctions such as less prominent listings and even the possibility of termination or suspension of their ability to sell on Amazon.” 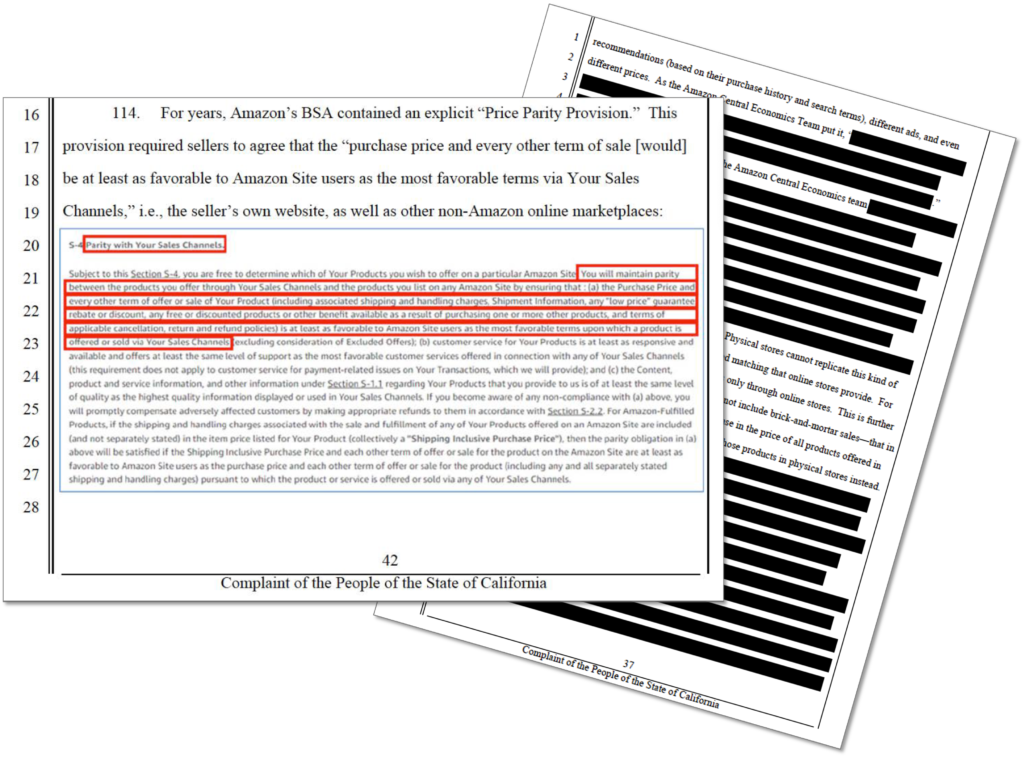 The complaint provided considerable detail and color commentary, while a good portion of it was redacted. Multiple provisions of Amazon’s Business Solutions Agreement and incorporated program policies required sellers to agree not to sell their products on other online retail sites for less than the prices on Amazon. The term Amazon uses for this parity requirement is “price competitiveness,” which means the seller’s price plus shipping must be less than or equal to the lowest price for the item offered off Amazon by unidentified retailers tracked by Amazon. “At first glance, this sounds like a good thing—like Amazon wants price competition. But it means the opposite,” the suit says.

One third-party seller quoted in the complaint said: “‘competitive price’ has like a very specific meaning to Amazon in this context. They’re not actually talking about whether or not a price is competitive in the eyes of a customer, but they’re actually more like talking about, like, what the grounds for the suppression of an item sold on their website might be … [T]his is some bullshit about how they’re trying to explain what their pricing suppression policies are by using language that is vague and in some ways euphemistic.”

The state asks the court to:

A similar case brought by the Attorney General for the District of Columbia was dismissed in March 2022. On Aug. 25 Attorney General Karl Racine filed a notice of appeal to revive the antitrust case.

Facing pressure from investigations launched by the U.K. and Germany in 2013, Amazon removed the so-called Price Parity Provision from the European market but maintained it for the U.S. market. In 2019 Amazon removed the provision in the U.S. in response to “intense scrutiny” from Congress and U.S. regulators, but quickly replaced it with an “effectively-identical substitute” called the Fair Pricing Policy.

The impact of Amazon’s conduct is made worse by a complex scheme of fees and charges imposed on merchants which can amount to 40% of the total product price. These charges result in higher prices for consumers not only on Amazon.com but on other e-commerce platforms. AG Racine further maintains that Amazon has entered illegal vertical and horizontal agreements in restraint of trade.