Dan Mogin of MoginRubin LLP and Travis Miller, General Counsel at Assent Compliance Inc., appeared on the Emerging Litigation Podcast to discuss a range of issues in the space where compliance and competition law intersect on the global stage. Read on for a summary of just a small part of a wide ranging discussion, or listen to the entire episode.

Dan and Travis spoke with host Tom Hagy in the context of two hypothetical cases. Tom describes the episode is a two-act presentation.

The first deals with compliance and competitive aspects of the Environmental, Social, and Governance (ESG) movement. The guests discuss the issue based on the story of a fictitious airline that is marketing itself as an environmentally green company. Its competitors are crying foul because the airline is not nearly as green as it says, if it is green at all.

“We’re in a paradigm shift right now,” Travis said. “Historically, most of what would be considered Corporate Social Responsibility (CSR) activity was all voluntary. They were all ‘nice to have’ efforts, but they weren’t mandated. Companies had carte blanche to take positions on what they wanted. It was a marketing and public relations activity. It was great to articulate good stuff a company was doing,” he said. “It’s better to do something good than nothing good; there is value in that from a socio-economic perspective.”

“But the tide is turning,” Travis continued. “Non-financial disclosure rules and regulations are becoming the turn of phrase that’s going to be the source of litigation activities in the 21st century. For that reason, companies have to become much, much more aware of what they’re saying and how they’re choosing to say it.”

“What you’re describing is an escalation,” Dan said. “We started out with some broad goals that came more or less under the umbrella of CSR, or good corporate citizenship. Clearly, as the environmental movement gained traction, we’ve gone from CSR to ESG, which is a different paradigm. With ESG we are seeing and more required disclosures, and certainly more shareholder pressure from various types of groups to incorporate those sorts of things in the corporate persona. So, yes, you’re going to see an uptick in activity.”

“Of course, all corporations want to clothe themselves in those sorts of values, at least publicly,” Dan said. “If they are not, in fact, in the case of the environment, truly reducing their own carbon emissions, then the statement is at least somewhat false. It’s that falsity that we lawyers have to drill down on and, from a litigation perspective, decide which particular claims are going to be implicated. The ones that come to mind are false advertising claims which can be pursued both by competitors and end-users, as long as the end-users can demonstrate some sort of tangible harm under the Spokeo and Ramirez cases.”

Next, Travis, Dan, and Tom talk about anticompetitive conduct involving a fictitious semiconductor manufacturer that is using its considerable market power to trounce competitors, stifle innovation, and raise prices for end purchasers. The impact of this behavior on the global supply chain is enormous.

Travis said the global aspect of this is a significant complicating factor. “Governance is key, because not all countries, not all companies, not all players in the international supply chain are abiding by or playing by the same rules,” he said. “The first thing you have to do is define what those rules actually are. And that’s governance. That’s codes of conduct. That’s policies. That’s contractual arrangements. That’s defining jurisdiction. Absent that, the probability of successfully bringing suit against a non-U.S. company in a U.S. or European Court, is near zero.”

“And even if you win,” Travis continued, “even you somehow establish standing, how are you going to collect? Because the next day, that company is going to be out of business, or they will shut down and the exact business will reopen under a different name.” In some cases these enterprises are supported by their government.

“The next thing that you have to consider is how did the company end up in its market position? How did they become the end-all-be-all of the market? The reality of that really boils down to Dan’s core practice (i.e. antitrust law).”

Dan picked up the conversation. “From a litigation perspective, you have to determine with a great degree of specificity, who you’re going to sue within the chain. And by and large, you’re going to try to find someone who is present in the United States whether the bad acts took place elsewhere, or you’re looking for somebody that has a presence in the United States for a whole host of reasons, not just jurisdictional, but to your point about collection.”

“The company you’re pursuing has to have a stake in the game and they have to feel the pressure of the totality of U.S. law and jurisdiction,” Dan said. 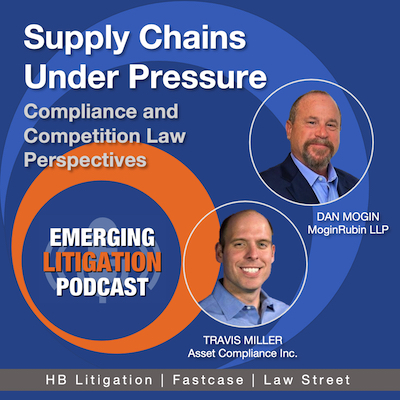 “There is a defense in antitrust — it’s not exactly jurisdictional — but it’s called ‘state action,'” Dan explained. “Typically, for example, a state or municipality that creates a monopoly under certain conditions, that monopoly is almost unassailable because they’re a state actor, rather than a commercial actor, or an actor engaged in restraint of trade or monopolization of trade, as it’s commonly understood.”

“However,” Dan continued, “as the state actor gets more involved with what we would typically consider to be private enterprise, the state action immunity begins to fade away. And so that’s one of the things that we have to do in that situation, particularly where you’re talking about state-controlled enterprises.”

Dan noted the litigation against the Chinese vitamin C cartel, in which competitors agreed to minimum price restraints. They all exported vitamin C to the U.S. Ultimately, they ended up essentially admitting to price-fixing in violation of U.S. antitrust laws.

Was the state compelling them to fixed prices?

“A key issue was whether the commercial actors that were doing business in the United States were at least sufficiently with the United States for jurisdictional purposes, and whether they were controlled by the state. In other words, ‘Was the state compelling them to fixed prices?'” Dan said.

“Discussion in the courts centered on how much deference had to be given to Chinese interpretation of Chinese law, as opposed to the American interpretation of Chinese law, and the extent to which we the United States would tolerate that sort of activity by state actors,” Dan continued. “There’s a lot of crosswind here, because on the one hand, it’s pretty clear that the Supreme Court and some of the appellate courts are chipping away at an expansive reading of U.S. jurisdiction in the antitrust field. On the other hand, as commerce is globalized, it becomes more and more difficult to enforce the antitrust laws unless you have at least some bit of extraterritorial reach. And state action is one of those areas that is particularly difficult to sort out.”

Addressing Travis’ question about how these market Goliaths come to be, Dan explained the different flavors of monopolies.

As for the smaller shops Travis mentioned, Dan said, “For small markets and those more removed from the United States, there is significantly less that we can do given litigation economics and the trends in the courts with respect to jurisdictional issues.”