Trump appointees say things were better during his term. 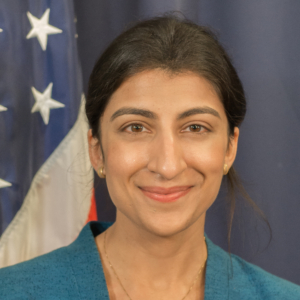 Federal Trade Commission Chair Lina M. Khan testified this week that despite being strapped for resources and having lost a valuable pro-competition tool at the hands of the Supreme Court, the agency is “reactivating the full set of authorities” granted by Congress, aggressively pursuing anticompetitive conduct, and modernizing. Two Trump appointees on the Commission criticized Khan’s testimony as giving credit to President Biden for the accomplishments of his predecessor and for misstating key facts about the economy to tell a rosy come-back story.

Khan testified before the Senate Committee on the Judiciary’s Subcommittee on Antitrust, Competition Policy and Consumer Rights on Tuesday (9/20/2022), saying “vigorous antitrust enforcement is critical to the growth and dynamism of our economy, as well as to our shared prosperity and liberty.” She said recent history has illustrated how Americans lose when markets become less competitive. “Prices rise, wages fall, and our markets become more fragile and less resilient,” Chair Khan said.

The chairwoman pledged to reassess how the FTC can enforce antitrust laws to “maximize efficacy” of the agency’s “scarce resources.” She said they are directing their efforts at the “root causes of competitive harm rather than looking at one-off effects.” Voicing “strong disfavor” toward behavioral remedies, she said the FTC “will not hesitate to reject proposed divestitures that cannot fully cure the underlying harm.” Chair Khan also said she sees opportunities for the FTC to deepen its partnerships with state attorneys general and international competition agencies.

Examples of the Commission’s work cited by the chairwoman included challenges to major mergers in the semiconductor, defense, energy, healthcare, and digital markets. The FTC’s enforcement measures “reflect the broader lens” to fully address anticompetitive effects of mergers, including non-horizontal and future-looking harm as well as adverse impacts on workers, she said.

Chair Khan offered several specific examples of the Commission’s work. It successfully challenged U.S. chip supplier Nvidia Corp.’s proposed $40 billion acquisition of U.K. chip design provider Arm Ltd., which would have been the largest semiconductor merger ever attempted. It blocked Lockheed’s proposed acquisition of Aerojet, “a defense merger that would have eliminated the country’s only remaining independent supplier of key missile propulsion inputs and given Lockheed the ability to cut off its competitors’ access to these components critical to our national defense.” She noted the FTC’s recent suit to block Meta’s proposed acquisition of independent virtual reality development studio Within Unlimited. If allowed to move forward, the merger would reduce consumer choice, innovation, and competition to attract the best employees, she said.

Chair Khan noted the agency’s “heavy merger workload” and limited resources, but said it continues robust efforts to identify and stop anticompetitive activity outside of the merger context. “The FTC is orienting its limited enforcement resources around targeting and rectifying root causes to avoid a whack-a-mole approach that imposes significant enforcement burden with few long-term benefits.” The FTC continues to scrutinize digital markets, she said, “recognizing that distinct features of digital technologies have ushered in new market dynamics and business strategies that require us to update our enforcement approach.”

“[D]ominant digital platforms have captured control over key arteries of commerce and communications in ways that can undermine competition,” she told the committee. “The FTC’s investigations in digital markets recognize the critical role of data, network externalities, moat-building strategies, and other key factors to make sure that our enforcement is reflecting commercial realities.” The chairwoman underscored the agency’s amended complaint against Meta seeking the divestment of Instagram and WhatsApp. “The amended complaint place[s] greater emphasis on the competitive importance of data and noted that privacy degradation can constitute an antitrust harm.” The judge in that case granted the FTC’s motion to amend the complaint and in January denied Facebook’s motion to dismiss the case.

All too often workers bear the brunt of languishing competition, while employers amass greater control. To address this she said the Commission is scrutinizing the proliferation of non-compete clauses. She noted that the FTC stopped DaVita, Inc., a large provider of dialysis services, from entering into agreements with physicians that would have restricted their ability to work for competitors. (Read our previous comments on cases against DaVita.) The FTC is also exploring the use of its rule-making authority to limit non-compete clauses that restrict workers’ post-employment choices, she said.

Chair Khan said the Supreme Court recently took a critical tool away from the agency. Ruling in April 2021 in AMG Capital Management v. FTC the court “upend[ed] decades of lower court rulings” supporting the agency’s ability to pursue equitable monetary relief for consumers in competition matters under Section 13(b) of the FTC Act.

The decision is already having a negative impact on the agency’s work to promote competition in the pharmaceutical industry, she said. The FTC brought “sham patent” allegations against AbbVie. A district court awarded $493 million to consumers harmed by inflated drug prices resulting from the company’s conduct.

“Previewing what the Supreme Court would ultimately make final in AMG, the Third Circuit held that the district court lacked authority under Section 13(b) to grant monetary relief to consumers. Defendants were able to keep their nearly $500 million in illegal proceeds, and consumers received nothing,” Chair Khan testified.

“To enable the Commission to continue to execute on its mission, all current Commissioners have repeatedly called on Congress to address this situation and restore the FTC’s full authority to return money to injured consumers.”

The FTC and Antitrust Division at the Department of Justice are also working to ensure that they can more readily detect potentially problematic deals, she said. The Hart-Scott-Rodino Act of 1976 authorizes federal antitrust agencies to issue rules to ensure they receive information needed to identify anticompetitive mergers.

The chairwoman’s testimony was approved by 3-2 vote by the Commission.

Former President Trump appointees Christine Smith Wilson and Noah J. Phillips provided testimony that the chairwoman’s statements represent “a dramatic departure from predecessor testimony in several material ways.” They said Khan “paint[ed] the FTC’s merger enforcement program as once moribund but now revitalized. The data tell a different story,” they assert. “Today, the agency is challenging fewer mergers and entering into fewer consents than during the [Trump] Administration.” These data are “even more striking” considering the pace of mergers was “significantly higher” after President Biden took office.

Wilson and Phillips said the FTC’s enforcement activity under President Biden has also been unimpressive. “Since January 2021, the FTC has brought only two new conduct cases, both settlements, and the testimony touts conduct enforcement actions brought under the [Trump] Administration as a demonstration of a change in course,” the two commissioners said.

They took issue with what they consider an attempt to use the FTC Act to “convert antitrust law from 132 years of statutes and adjudicated court decisions to regulations promulgated by the FTC. We have no such authority under the statute, and if we did it would violate the separation of powers embedded in the U.S. Constitution.” Critics say rules prohibiting unfair or deceptive practices and unfair methods of competition would be a dramatic shift since the FTC has traditionally relied not on rule-making, but on the Sherman Antitrust Act, the Clayton Act, and FTC Act enforcement actions and consent decrees to develop federal antitrust law.

The dissenting commissioners closed by saying the testimony was “replete with unsupported factual assertions.” As examples, they said Khan cites consolidation in labor markets, “where empirical data show the opposite,” and increasing concentration throughout the U.S. economy which is “neither based on markets within which competition takes place, nor on their own indicative of lessened competition.”