A U.S. Supreme Court victory against Visa and Mastercard over ATM fees has helped unite two soloantitrust litigators to form a bicoastal firm.

Rubin and Mogin’s partnership dates back to about a year ago. They knew of one another through the American Antitrust Institute, but for much of their careers worked on different types of appellate cases. Mogin focused on California-based disputes, especially at the state court level, in antitrust and investment law. Rubin appeared in court primarily in Washington in antitrust disputes.

“I was sitting in my office in San Diego and the telephone rang, and Jon was on the other end of the phone. He began to tell me about the case he had against Visa and Mastercard,” Mogin said.

Rubin described how another firm, Lukas, Nace, Gutierrez & Sachs, had stopped working on the case, and he needed back-office support. “You either have to be a masochist or have some help,” he said. “Maybe some of my ex-wives would call me a masochist, but I went for the help.”

Rubin said he had to talk Mogin into saying yes to the ATM case. “It taught me something about Dan. He’s got very good judgment. He’s not emotional. He’s very smart,” Rubin said.

“Dan and I are able to talk about things on a very sophisticated level and move onto the next thing,” Rubin said. “We don’t have to sweat over understanding complicated stuff, because we’ve been through it.” In addition to his law degree, Rubin has a Ph.D. in economics from the University of Copenhagen. Prior to his sole firm venture, he was a partner at Patton Boggs in Washington.

Mogin described a “nerdy and nice” affinity that developed between the two lawyers while they worked on the case.

“They were already a great team when we worked together at the Supreme Court, so this makes a ton of sense,” appellate litigator Tom Goldstein, who worked with Mogin and Rubin on the ATM case, said about the pair’s new partnership. “I found them incredibly knowledgeable and great colleagues to work with.”

The combination will allow Rubin to con-tribute to Mogin’s major cases, while Mogin can increase his East Coast visibility as more of his types of cases materialize outside of California and focus on antitrust law. Recently, the Supreme Court declined to hear an appeal that could have prevented Mogin’s clients from certifying a 12 billion antitrust class action.

The deal also allows Mogin and Rubin, who are 61 and 62, respectively, to start thinking about transitions—although neither lawyer wants to get ahead of himself.

“Oh hell no. They can carry me out with my boots on,” Mogin said about the prospect of retirement.

“My mother’s 100 years old,” Rubin said, separately. “We’re looking for a good 10 years or more of a successful practice here.” 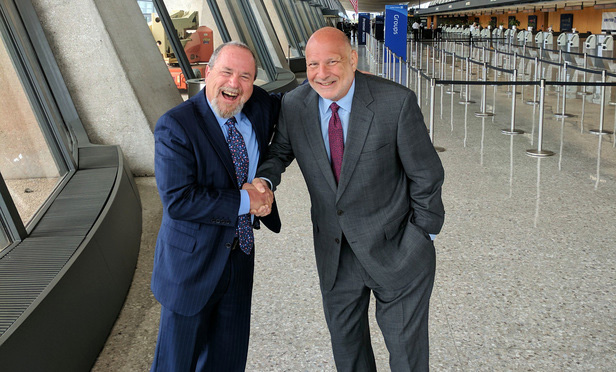 Katelyn Polantz is based in Washington, D.C., and writes about government and the business of law. She can be reached at kpolantz@alm.com. On Twitter: @kpolantz.