Marking the first time in decades that it has sued to block a defense industry merger, the Federal Trade Commission on Jan. 25, 2022 filed a complaint to stop Lockheed Martin Corp.’s $4.4 billion acquisition of Aerojet Rocketdyne Holdings Inc. 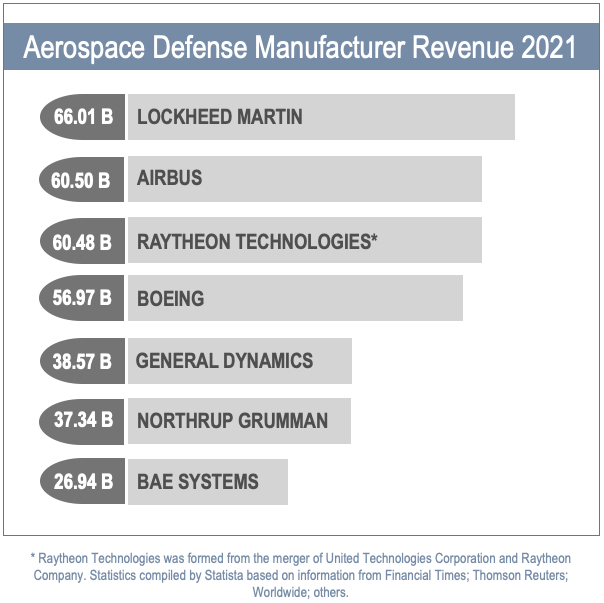 The FTC says Aerojet, which reported more than $2 billion in 2020 revenue, is the last independent U.S. supplier of defense-critical missile propulsion systems. If the deal goes through, the FTC said, “Lockheed will use its control of Aerojet to harm rival defense contractors and further consolidate multiple markets critical to national security and defense.” The Commission was unanimous in its decision to seek a preliminary injunction. An administrative trial is set for June 22.

Lockheed leads the pack of the largest defense contractors in the world. It is one of the leading suppliers of missile technology in a concentrated group that includes Raytheon Technologies, Inc., Northrop Grumman Corporation, and The Boeing Company. All are missile system prime contractors to the Department of Defense. The FTC says these companies are intermediaries between the U.S. government and the missile supply chain, including subcontractors like Aerojet.

Fortune Business Insights put the global rocket and missile market at $52.54 billion in 2019 and forecasts it will reach nearly $72 billion by 2027. The rocket propulsion market exceeded $5 billion in 2020, according to Global Market Insights. In the six months that ended June 30, 2021, Aerojet recorded $13.6 million in costs associated with the planned merger. Lockheed rival Raytheon Technologies was created from the April 3, 2020 consummation of the merger of Raytheon Company and United Technologies Corp.